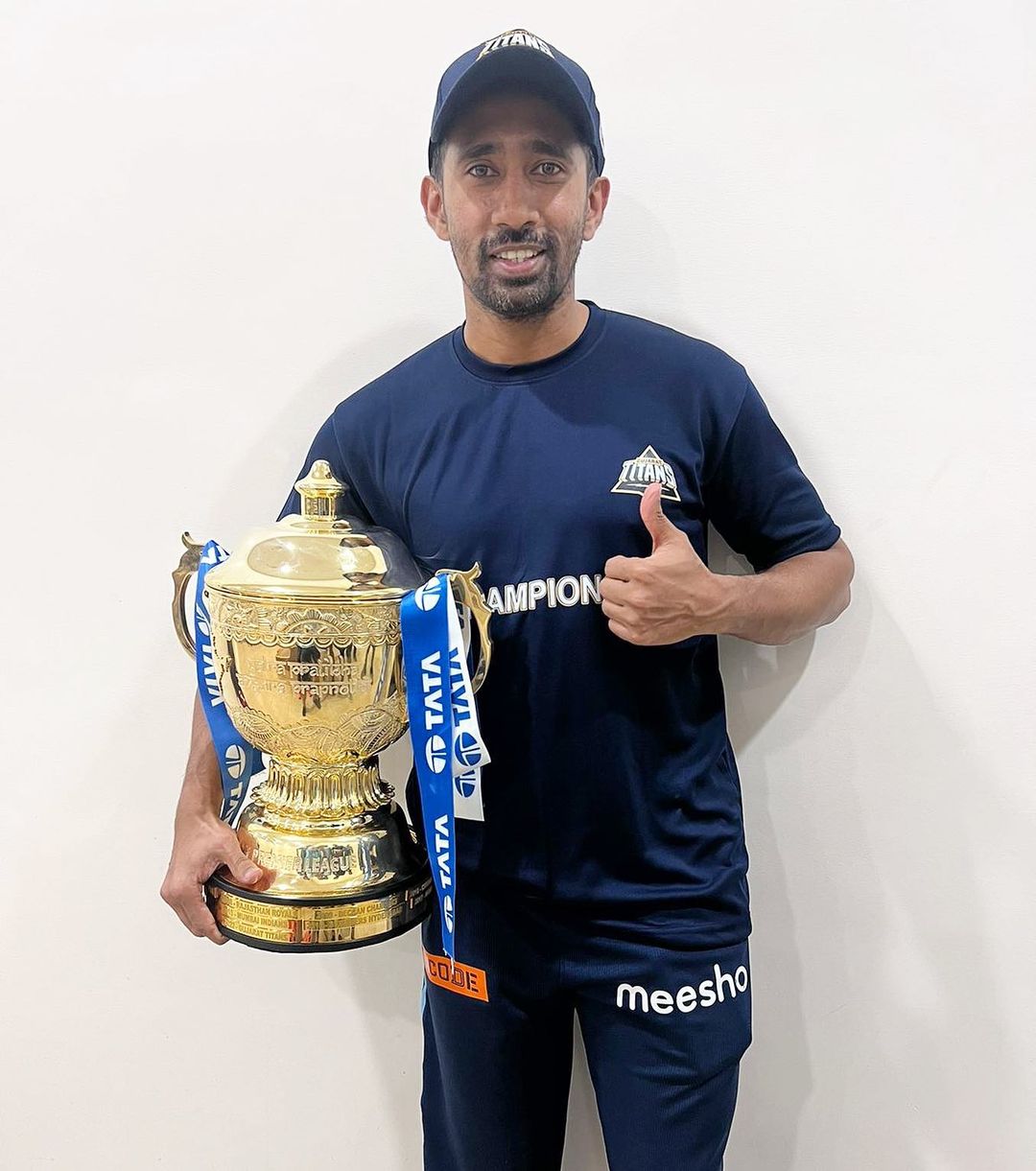 Wriddhiman Prasanta Saha, born in Siliguri on October 24th, 1984, is an Indian cricketer who plays for the national team. Wriddhiman Saha was chosen to replace seasoned wicketkeeper Deep Dasgupta in Bengal’s Ranji team.

He represented India on the international stage in U-19 & U-22. He is an experienced wicketkeeper-batsman and has been part of the squad since his first international debut in 2010.

In spite of wracking up impressive achievements on the field, he remains humble and focused on continuing to improve his game. As one of India’s most dependable players, Wriddhiman Saha is sure to remain an integral part of Team India’s future successes.

His debut hundred against Hyderabad was enough to turn the heads of those scouting for players for the inaugural Indian Premier League and result in him being drafted into the Kolkata Knight Riders.

As a wicket-keeper, he exhibited great skill, while his ability to hit big shots during the death overs earned him praise from onlookers. Despite not having much success in the other games, his performance in this one game secured him a place on the team.

The main source of income for the cricketer is Cricket and brand endorsements. Wriddhiman is considered to be amongst the finest with gloves. This has garnered a lot of popularity for him.

The following are the brands that Wriddhiman Saha endorses:

These and many other brands are there with which the cricketer’s name is associated, and he mainly promotes them from his IPL team and sometimes with his team players.

Wriddhiman Saha’s Father, Prashanta Saha played cricket and football for Siliguri leagues, but due to some financial problems, he discontinued; he used to work for West Bengal State Electricity Board and is currently retired. Wriddiman Saha’s mother, Maitrayee Saha, is a housewife. Saha also has an elder brother Anirban Saha who is an engineer.

Wriddhiman Saha’s Wife is Romi Mitra (Debarati Saha); they both met on a  social media platform called Orkut, and from there, they started dating and, after four years, decided to tie the knot in 2011.

They got married in a very private ceremony, and after two years, the couple was blessed with a beautiful daughter, Anvi Saha. In the year 2020, Romi gave birth to a baby boy, a younger brother to Anvi, Anvay Saha.

Wriddhiman Saha is an experienced wicketkeeper-batsman; though it is true that he was not given much chance early in his career due to the Dhoni Supremecy, after Dhoni’s retirement, he was the first choice.

Finally, when his time had come, he was getting chances to show this game. Still, there was some resistance. This was clear when he was axed from a Home series against Sri Lanka.

Saha was not in any mood to let this go; in a media interview, he said that he was reassured by BCCI President Sourav Ganguly on WhatsApp saying that as long as he is in tenure, Saha does not have to worry about being selected for the national squad.

Saha was not happy that even after the reassurance, he was not selected. The brewed spicy controversy around already under controversy Sourav Ganguly.

When Wriddhiman Saha was not selected for the squad, he was not at all happy; he not only blabbered about Ganguly, but he also wrapped Rahul Dravid, the Indian team coach, into this mess.

According to him, Dravid told Saha to think about his retirement, and this statement was not taken in good taste by the wicketkeeper.

Before this incident could take the form of a forest fire, Dravid came clean to the press, saying that they are trying young players for this format and keeping a 37-year-old Saha as a backup for 28-year-old Pant does not seem appropriate to him. He is looking after the national interest and sometimes has to do tough talks with his players. Sometimes the players understand the issue sometimes, and they don’t.

With this statement, David was able to clear his side, putting an end to this controversy.

It looks like not getting selected for the team did not sit right with Wriddhiman Saha; after all the controversies, he landed into another one. This time with no fault of his own.

The cricketer took to Twitter to share a WhatsApp chat screenshot asking if this is how he should be treated after contributing to the Indian Cricket team.

In this case, a journalist named Boria Majumdar wanted to interview Saha, but he refused; then the journalist harassed him on WhatsApp, asking for one interview, and upon receiving no response, he threatened the cricketer.

BCCI picked up the case, and the journalist was banned from entering any stadium or interviewing any BCCI personnel, including players, for two years.

The cricketer is not much of a car enthusiast and does not have a massive car collection like some of his fellow cricketers. There is not much known about what specific cars model the cricketer owns but here are the three cars brands to his name, and they are as follows:

Apart from cars, the wicketkeeper also owns an ancestral house in his hometown Siliguri; along with that, he also owns a house in Kolkata, where he stays with his family.

What is Wriddhiman Saha’s age?

What is Wriddhiman Saha’s wife’s name?

What is Wriddhiman Saha’s Net Worth?

Wriddhiman Saha’s Net worth is estimated at around $8 Million.

What is Wriddhiman Saha’s Children’s Name?